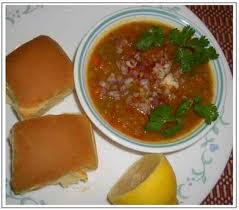 This is my one of the favourite street food and no matter what it will never taste like the one you get in the streets, substitution of oil instead of butter could partly explain it. I have come across a lot variations in the use of vegetables but I think the key ingredients are potatoes and tomatoes. Rest of veggies are secondary. This is my simple way of making it.
Ingredients:
For bhaaji-
Potatoes-3,chopped
cabbage-2 cups,chopped
mixed veg-1 cup
Tomatoes-3
Onion-1 large,chopped fine
ginger garlic paste-2tsp
Spices- 1 tsp chilli powder,1/4 tsp turmeric powder,1/2 tsp garam masala.4 tsp pav bhaaji masala
butter/oil
For PAV- Pav/dinner rolls, butter
Method:
1. Pressure cook the veg ,potatoes,cabbage with turmeric and 1 cup water.
2. In the meantime, in oil add the onions, sautee till soft then giger garlic paste,saute till brown.
3. Add the spices then the tomatoes and salt. Cook till it all pulpy ,mashing the tomatoes.
4.Add the cooked vegetables and simmer for 15 min . Add a blob of butter.
5. For pav, add some butter, sprinkle a pinch of pav bhaji masala and split the pav slightly toast it,
6. Serve bhaji sprinkled with chopped onions, coriander leaves and a squeeze of lemon along with pav.
Posted by Naveena.Sukumaran at 01:12

Naveena.Sukumaran
United Kingdom
Hi. I am a mum of 3 kids and work full time as an anaesthetist. I love cooking but at the same time do not want to spend the entire free time in the kitchen. The recipes posted here are easy and simple which will appeal to kids and grown ups. I love to try cuisines from all around the world and adapt them to suit my taste and time. My motto is "keep it simple". I am a vegetarian, so most of the recipes are vegetarian but rest of the family eats non- veg food hence that cooking is done by Ashok. If you have tried any of the recipes then feedback and suggestions are most welcome. Thanks for visiting.